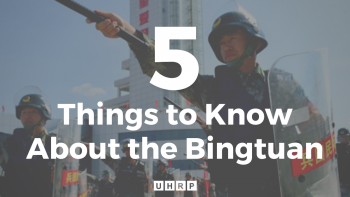 EXPLAINER—Five Things to Know About the Bingtuan

The Xinjiang Production and Construction Corps is also known as the Bingtuan, or “military unit” in Chinese.

The Bingtuan, meaning “military unit” in Chinese, is a paramilitary force made up of 14 Divisions. It commands a population of 2.7 million over an area of 80,000 square km of East Turkistan, around 12% of the region’s total population.

It is sometimes referred to as a “state within a state.”

2. Serves as a Colonizing Force

The Bingtuan was founded to “increase the Han population” in the Uyghur homeland and has constructed 13 new cities to absorb Han migrants and dilute the Uyghur population.

Chinese propaganda depicts the Bingtuan as a continuous part of Han colonization efforts in East Turkestan dating back thousands of years.

The Bingtuan carries out systematic human rights abuses against Uyghurs.

The Bingtuan is the single largest producer of cotton in the Uyghur Region and utilizes forced labor throughout the textile supply chain from irrigation all the way to finished products.

For global companies, it is practically impossible to be involved in any kind of agricultural or industrial activities in the Uyghur Region without engaging in some way with the Bingtuan, and therefore with forced labor.

The Bingtuan constitutes a multibillion-dollar state-owned business. Bingtuan-controlled interests make up around 20% of the regional economy.

Over 850,000 companies in 147 countries, including the United States, Germany, and the U.K. are part of the Bingtuan’s international business operations.