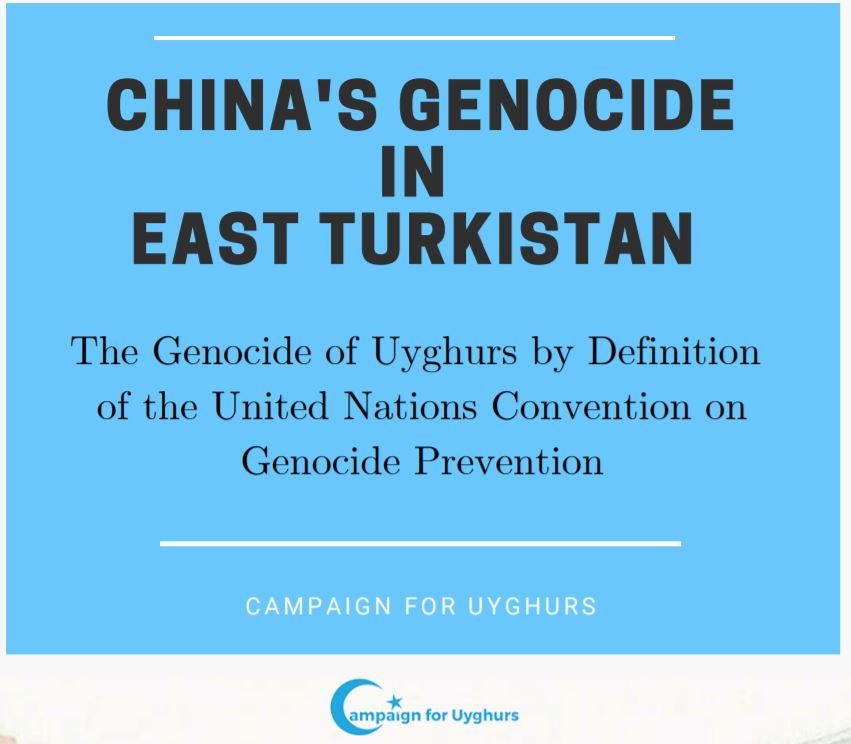 China’s Genocide in East Turkistan: The Genocide of Uyghurs by Definition of the United Nations Convention on Genocide Prevention

Campaign for Uyghurs is pleased to announce the release of a new report, “China’s Genocide in East Turkistan: The Genocide of Uyghurs by Definition of the United Nations Convention on Genocide Prevention”.

It is the sincere hope of each member of the CFU team who worked hard to compile the information contained therein that this report will be useful for all those potential allies in the fight to end China’s genocide of the Uyghur people. By laying out how each condition of genocide laid out by the United Nations is being met by the Chinese regime’s actions towards the Uyghurs,  this accessible material can will lead to greater recognition of the need to label these atrocities as what they are: Genocide. As such, all individuals, corporations, organizations, and nations must treat the Chinese regime as the rogue state that it is.

On the occasion of the release, Campaign for Uyghurs Executive Director Rushan Abbas stated, “As always we are dedicated to using any means possible to advocate for democratic freedoms and human rights. What the Chinese government has done to the Uyghur people in this, the twenty-first century, is unimaginable, and it is even more unimaginable that the international community continue to remain meek and even silent in the face of these unspeakable atrocities. This is genocide, and anyone who continues to deny this fact must have vested financial interests in China that have caused them to compromise their very soul.”

We call on the international community to implement every recommendation contained in the report and to act swiftly to address the annihilation of the Uyghurs as atrocities that should have been addressed long before they turned into genocide. To act now is already late, but not yet too late.

You can reach full document by this link.