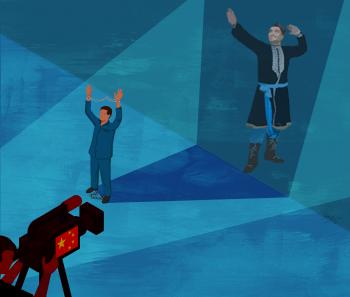 UHRP REPORT: “The Happiest Muslims in the World”: Disinformation, Propaganda, and the Uyghur Crisis

The Uyghur Human Rights Project has released a new report analyzing the Chinese government’s attempts to craft and promote a narrative responding to international criticism of its large-scale arbitrary detention of Uyghurs and other Turkic peoples.

In “The Happiest Muslims in the World”: Disinformation, Propaganda and the Uyghur Crisis, UHRP traces the evolution of the Chinese government’s narrative from secrecy and denial to whitewashing and justification.

“The CCP is relentless in its efforts to cover up and justify its human-rights crimes against Uyghurs,” said UHRP Executive Director Omer Kanat. “The authorities claim that the world should applaud their policies in East Turkistan, but they cannot admit what they are really doing. This large-scale disinformation and propaganda campaign is the other side of the coin of genocidal repression.”

After being confronted at the August 2018 UN Committee on the Elimination of Racial Discrimination review, the Chinese government at first completely denied the existence of mass detention camps, but soon reversed course by justifying the concentration camps as an effort to educate “extremists” in “vocational training centers.” Later, the government claimed that detainees had “graduated,” as it launched a vast scheme of factory forced labor and meted out long prison sentences without trial.

Officials claim that all criticism of China’s policies are a foreign conspiracy, going so far as to say that “the happiest Muslims in the world live in Xinjiang.”

Chinese state media videos featuring coerced statements by the family members of diaspora Uyghurs amount to a type of “hostage propaganda.” Residents of the Uyghur region are filmed declaring that they have not been mistreated in any way, and denouncing their overseas relatives for spreading “lies.” These propaganda videos add to the trauma that Uyghurs overseas are already suffering due to their relatives being disappeared into camps or given long prison sentences.

“Politicians and international media must not fall into the trap of recycling the CCP’s brazen and cynical disinformation and propaganda,” urged UHRP’s Omer Kanat.